They originate from the Hakka region in China. They settled in Kolkata, India. The story dates back to the 19th century during colonial times. A few Chinese families migrated to India for better life.

It is unknown exactly when this particular dish was invented. It has become popular all over India in the last 2-3 decades. 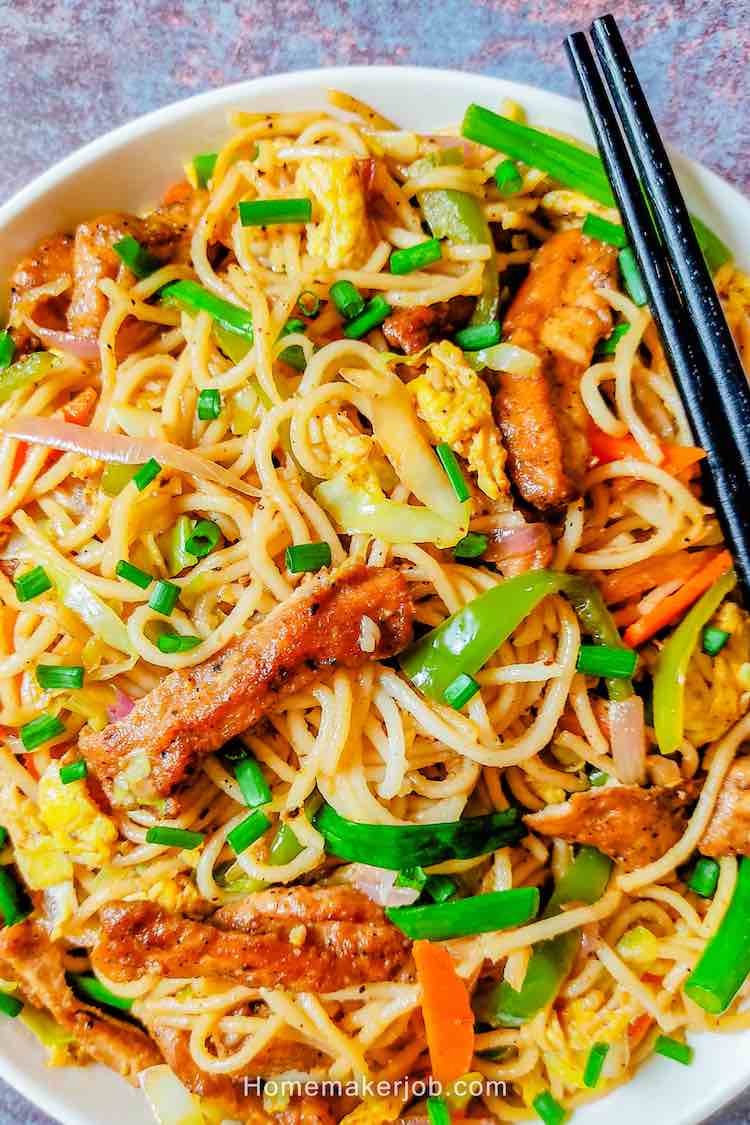 It is a fried noodle dish with a light brown color due to the soy sauce in it. It shares a common taste profile with other Indo-Chinese dishes. It has a slightly tangy and salty taste. As boneless chicken pieces are coated with corn flour, they taste crispy and chewy.

The coating also contains egg white, soy sauce, and black pepper. It adds sourness and spice to the taste. The noodles will be dry and soft, fried with different Chinese sauces along with different vegetables. So, all these ingredients together create a tasteful mix of sour, salty, spicy, crispy, and chewy.

Chow mein is different dish from Hakka Noodles though they are similar in many aspects. Chowmein belongs to the original Chinese cuisine, while later belongs to Indo-Chinese cuisine. There is a difference between the raw noodles used in both recipes.

Hakka noodles is dry in nature, while chowmein is juicy as it has more sauces. Chowmein has a sweeter taste, while hakka noodles are saltier. Chow mein has more vegetables than hakka noodles. There is another difference of green chilies and eggs, which are used in hakka noodles but not in the chowmein.

How to choose right ingredients:

We need special type of noodles for this recipe which are hakka noodles. You should buy an off-the-rack packet of hakka noodles. These are dry, uncooked noodles and can be boiled to make them ready for further use. These are easily available everywhere nowadays. These are specially made for hakka dish. They will give the best texture and taste to the dish.

If you don’t get them, you can buy any other Chinese noodles packet.

Avoid noodles like Maggi or any other instant ramen. Use them only if you have no other better option available. Chinese noodles are specifically made to suit Chinese cuisine. They will be thick and non-curly unlike their instant counterparts. They will be non-sticky and will not break easily when cooking. They don’t become too soft, even if a bit overcooked. 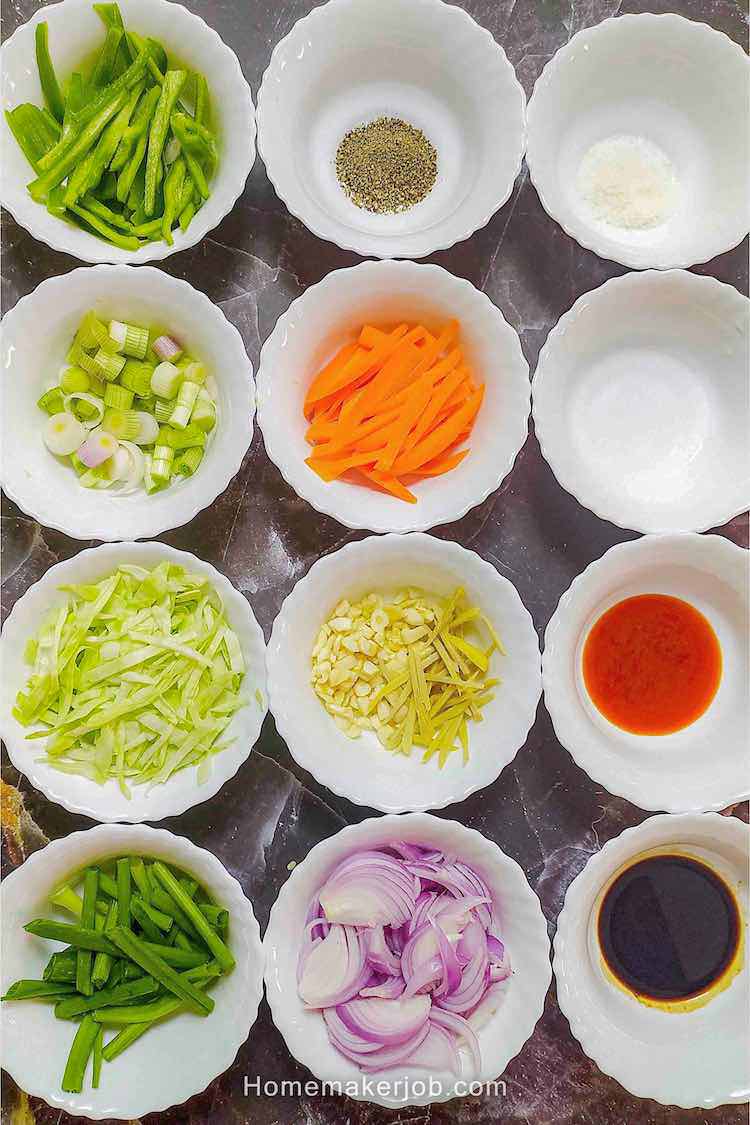 This recipe needs boneless chicken. Chicken breasts are preferred for this recipe. The texture and hardness of the breast part makes it ideal for the chewy taste. Chicken thighs are also fine as long as the pieces are not too soft.
Cut chicken into medium-sized stripes/cuboids or small cubes. Make sure there aren’t any bone(s) in any of the pieces. Make the cuts as fine as possible.

The most common ingredients in Indo-Chinese cuisine are ginger and garlic. Chop garlic into tiny pieces to make ginger julienne.
This is different from the ginger garlic paste. For the marination, we need ginger garlic paste too. It adds a nice aroma to the recipe.

Take a julienne of fresh medium-sized carrots, capsicums, and cabbage.

We need two types of onions: regular onions and spring onions. Both spring onions and green onions (scallions) are suitable for this recipe. Choose whichever is available to you.

Regular onions are chopped into thin slices. It mixes with noodles and improves the taste and texture of the dish. Cut the white part of the spring/green onion and put it in a different bowl. Chop it into thin slices. This part brings a touch of sweetness to the taste.

Any Indo-Chinese recipe is incomplete without soy sauce. There are few recipes that are exceptions to this rule. Soy sauce adds a sour and salty taste to the recipe. It gives the color to this dish that we see. It adds a nice aroma and increases the acidic profile of the dish.

This sauce is used to add heat to the dish. It is not highly spiced but mildly spicy. It adds a slight red color to the dish.

White vinegar or rice vinegar is preferable. You can choose any vinegar, except flavored ones.

Black pepper is a standard ingredient in Chinese recipes to add a spicy taste. If it’s not available, you can substitute it with white pepper.

For any Indo-Chinese recipe, wok is the perfect equipment. If you don’t have wok, you can use any Kadhai or frying pan. Just make sure it’s big enough and has good depth to allow occasional stirring.

Boil the raw noodles for 7 to 8 minutes on medium heat till they become soft. Drain the water. They shouldn’t be raw, but they shouldn’t be overcooked either. Check for the instructions provided on the packet you purchased. The boiling steps might differ based on what type of noodles you are using.

Spread boiled noodles on a plate and leave them aside to cool down. Follow the instructions in the recipe card for proper boiling. 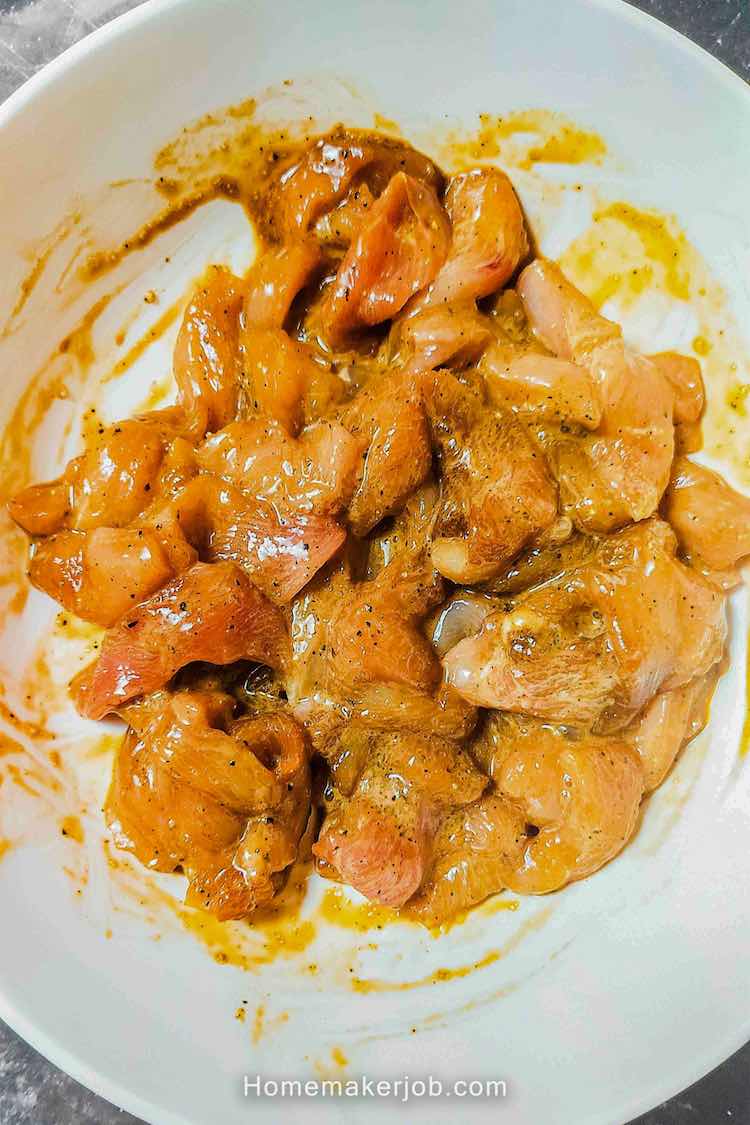 To make the marinade, mix black pepper, soy sauce, salt, egg white, and corn flour together. Follow the exact amounts mentioned in the recipe card to avoid making the coating too thin or too thick.

Too much corn flour can make pieces too hard and difficult to chew.

Make sure all sides of the pieces are covered well with marinade. Leave it for 10 to 15 minutes, so that the chicken absorbs the taste of the ingredients.

Authentic Chinese recipes use stir frying like their Indo-Chinese counterparts. In stir frying, ingredients are frequently stirred and tossed in a low amount of very hot oil. You can get away with stirring if you are not an expert at tossing. Just make sure, you keep stirring everything frequently.

Don’t let any ingredient sit idle in the wok/pan. You should stop frying once the chicken starts to light brown and the outer coating becomes crispy. Don’t fry for longer than necessary, as we’ll be cooking it again later.

Take eggs and beat them well. It is necessary to beat them well so that they become fluffy and soft after cooking. Add it in kadhai/wok and scramble it well.

This dish will taste the best with schezwan sauce or chutney. Other items like vinegar, chili sauce, soy sauce and green chili sauce etc can be served with the dish. It’ll allow if someone wants dish to be spicier or more sour. 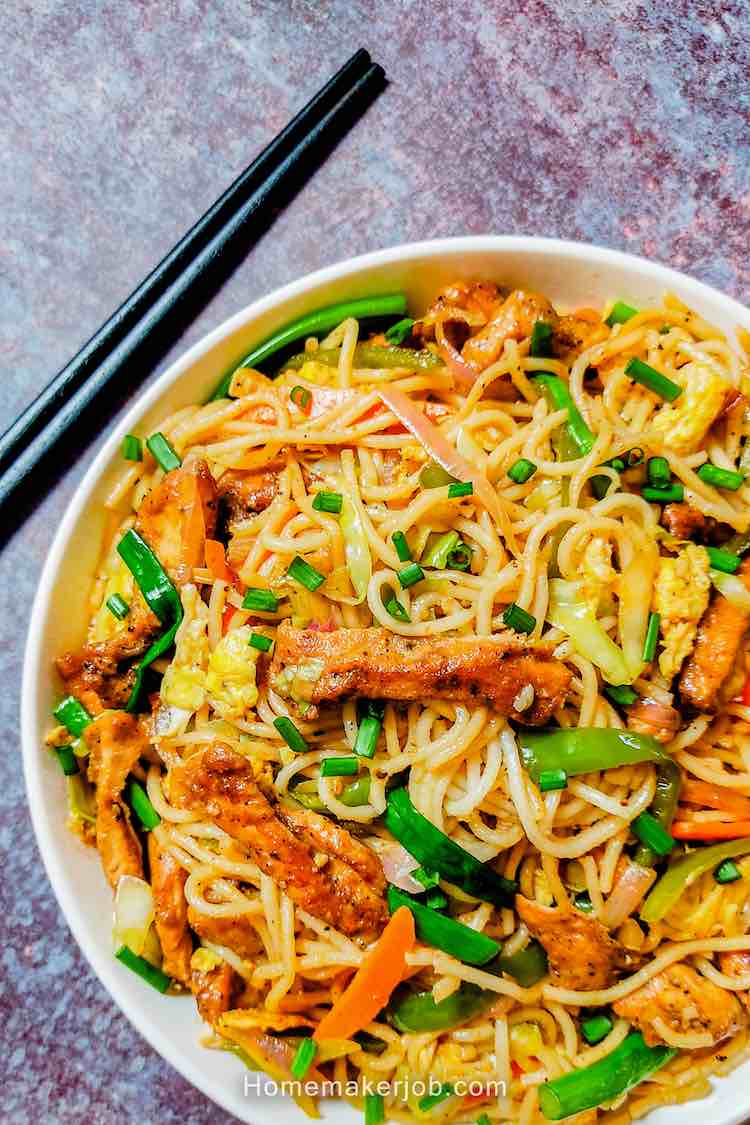 Vidya
Chicken Hakka Noodles is one of the most popular street food. Everyone who loves Chinese food might have tried this dish at least once. It has chewy fried chicken, scrambled eggs, crunchy veggies, and sweet and sour sauces. It has a unique taste and if you’ve never tried it, treat yourself. It needs a bit of preparation and effort, but it is worth it.
Print Recipe Pin Recipe
Prep Time 20 mins
Cook Time 20 mins
Total Time 40 mins
Course Main Course
Cuisine Chinese, Indo-Chinese
Servings 4 people

To boil the noodles

To fry the chicken

To make the scrambled eggs

To make the hakka noodles

Frying the chicken and making the scrambled eggs

Spread love with food:
Subscribe with us to get delicious recipes directly to your inbox: 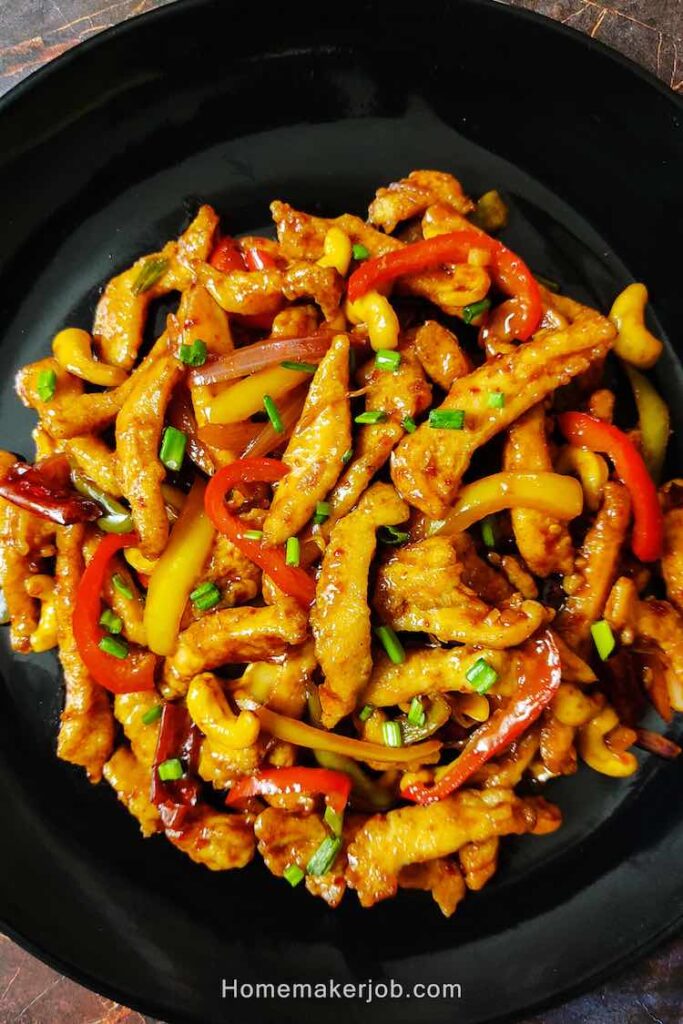 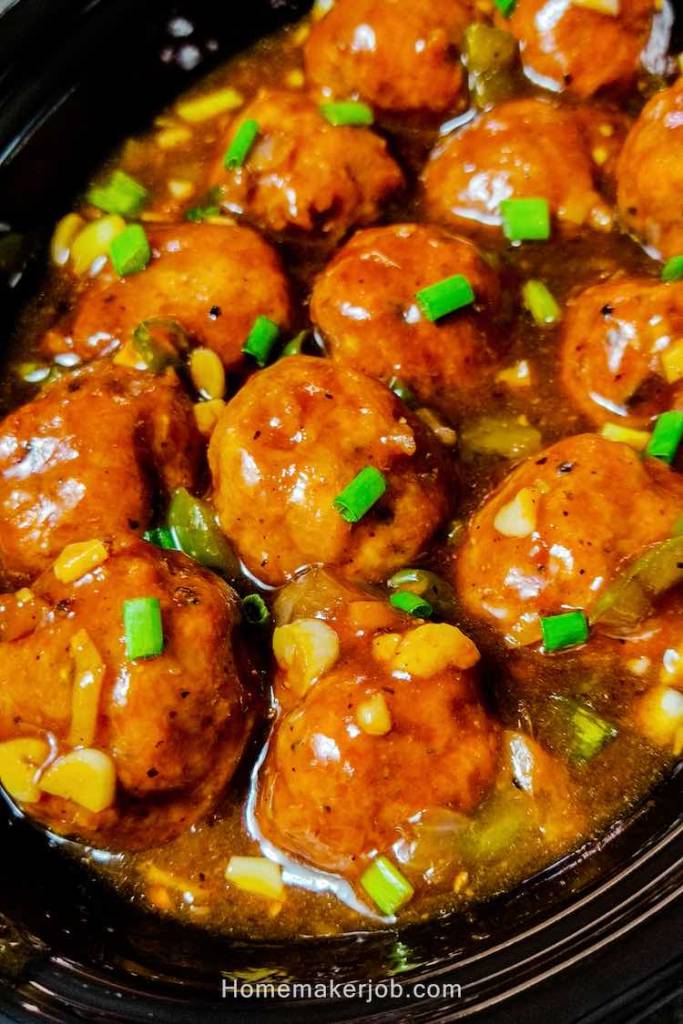 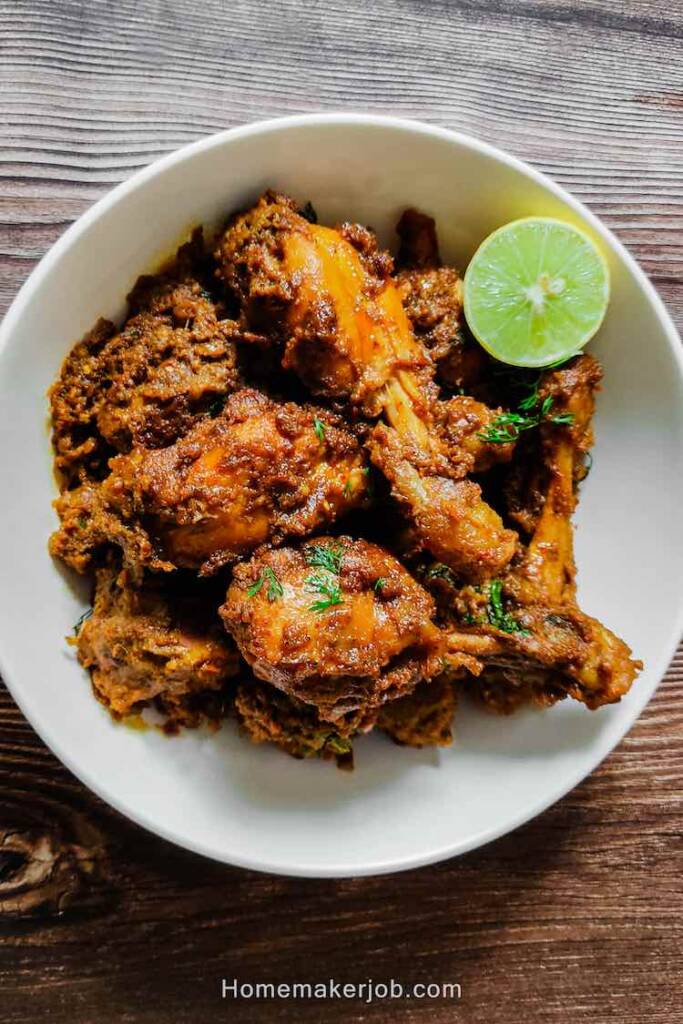 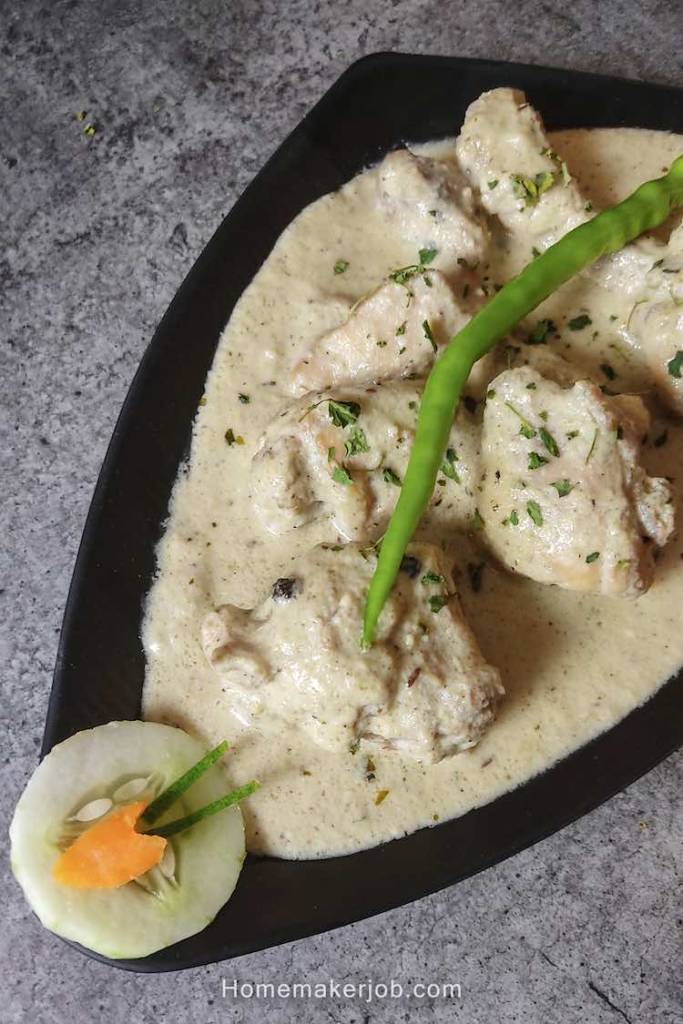 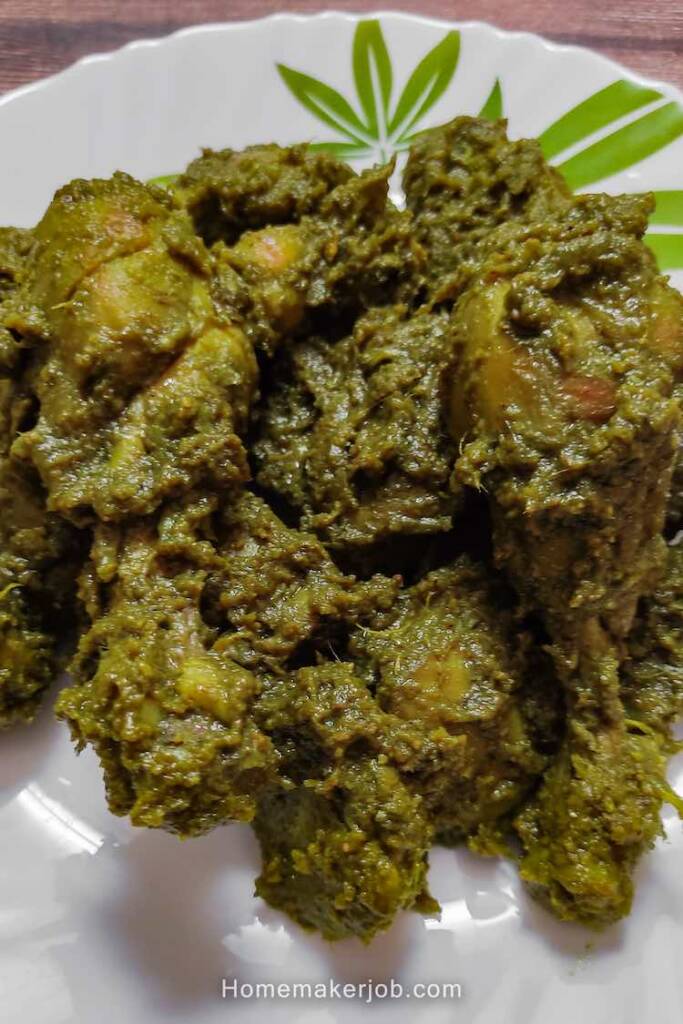 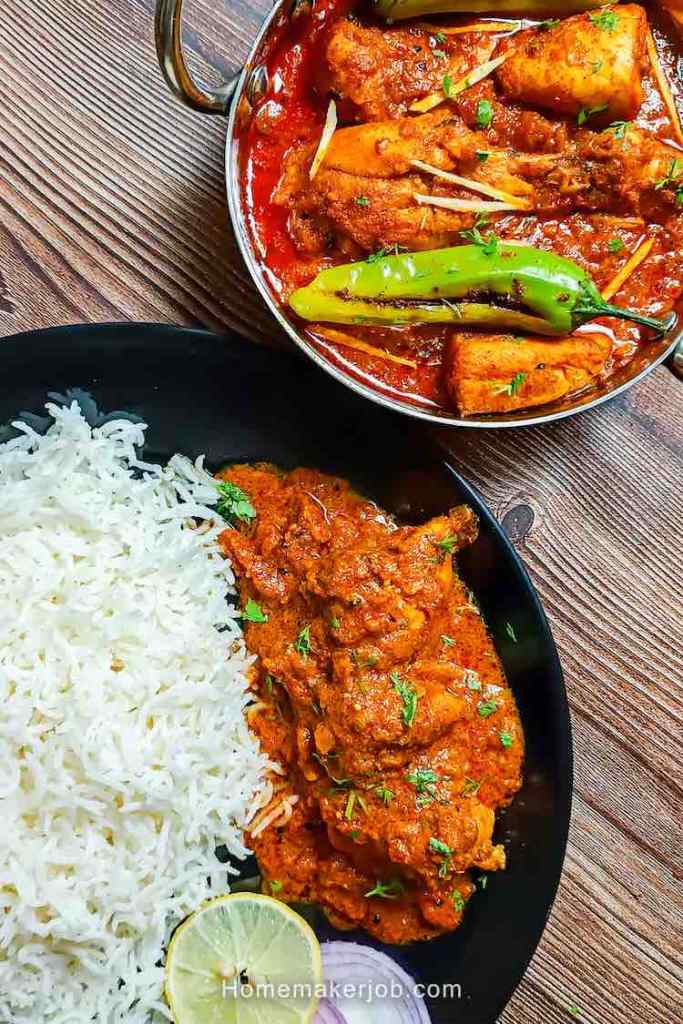 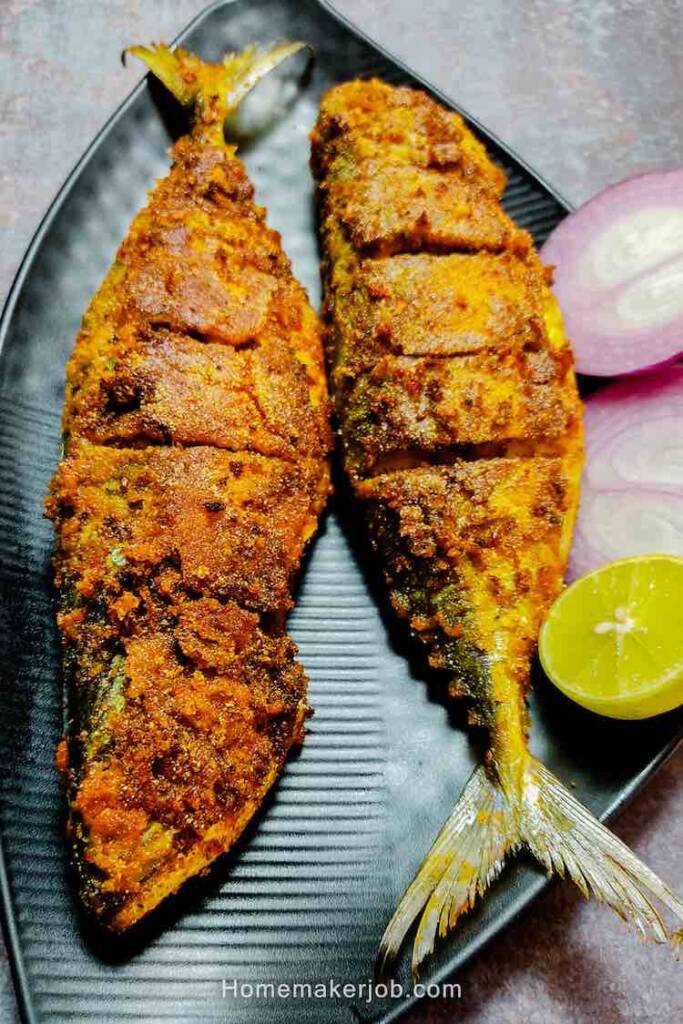 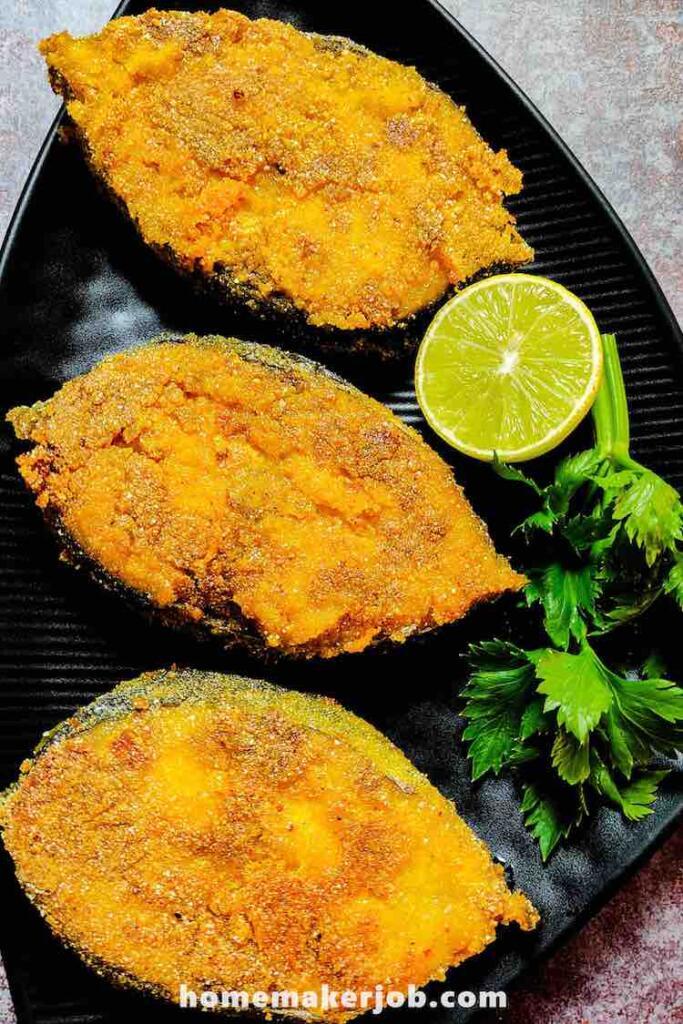